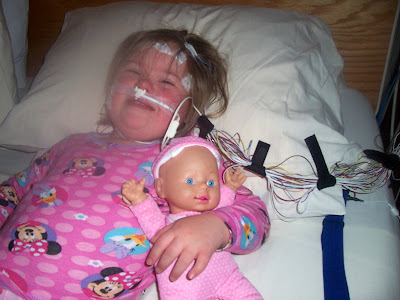 On Monday, November 8th, Emeline had a sleep study to confirm what we were pretty sure we already knew---that she has obstructive sleep apnea. Emmie has always been a restless sleeper, and she was quite the snorer until she got her tonsiles and adenoids removed at around 18 months. The noisiness improved, but the restlessness did not. It is not unusual for Em to sit up in her sleep, gasp, and then flop down, in a "seated-Indian-style-but-with-my-head-face-down-on-the-bed-in-front-of-me" position. Many times during her (more frequent than we have liked) hospitalizations, nurses would come in and say, "Oh my goodness! How can she sleep like that?" I always answered, "I don't know, but she does, ALL THE TIME.
In addition to her very active movements while sleeping, it has always been noticeable when she was in-patient, that her oxygen saturation levels
are consistently a problem when she's sleeping. (I'm pretty sure some of the nurses are convinced that I rig the O2 saturation monitor to beep on a regular basis, because it ALWAYS goes off, and they say, "I have no idea why this thing keeps going off," to which I reply, "I think it's because she has sleep apnea." Finally, at Em's yearly evaluation at the Down Syndrome Clinic a few weeks ago, I mentioned that I really thought she had sleep apnea, and I would like a sleep study to either confirm or rule it out. The doctor I was visiting with was shocked she hadn't had one by now, but I told her I think since she had already had her tonsils and adenoids removed, the ENT had assumed that apnea would not be a problem for Emeline. Well, clearly, that was not the case.


So she had the sleep study last Monday. The clinician from the sleep study center called me this afternoon and told me the results. Emeline's Base O2 levels were at 92%, with a low of 85%. She said this falls into the category of "Singificant Obstructive Sleep Apnea," and that Emeline needed to come in for another sleep study, and to be fitted for a C-Pap machine. Lovely. If I were a betting woman, I would place money that the last clinician would PAY good money to NOT have to deal with Emeline again. Don't get me wrong, the lady was WONDERFUL. Really. She was probably one of the MOST patient professionals we have ever dealt with, and believe me, that is really saying something! She spent at least an hour and a half hooking all the leads up all over Emeline's body, and even when Emeline screamed, kicked, and raised the fit to end all fits, ripping leads off, the clinician was calm and soothing and totally composed. (Even when the Mommy was about to lose it and burst into tears!)

She did eventually get everything hooked up, and I laid down with Emmie in the queen sized bed, and she went right to sleep. I was secretly relieved when she began her regular tossing and turning, because I was half-way afraid that she would go there and sleep great, and they would tell me she was fine, when I knew good and well she was having episodes of apnea. My greatest fear was they would tell me everything was fine, when I knew that it really wasn't.

Anyway, back to the sleep study...Around 5:15 on Tuesday morning, the clinician came in and woke us up, and told us we could head home. Emeline was almost as angry at the removing of the leads, as she was at the placing of them, but she survived, and we headed home. The glue they used for the leads on the top of her head (in her hair) was icky-sticky, and the clinician told me to use peanut butter in her hair, and it would come right out. Well, it did work pretty well, but Emeline was NOT happy when I had to wash her hair 3 times just to get the peanut butter and residual oiliness stripped out. Fun times, let me tell you! LOL

So where do we go from here? We have another sleep study scheduled, where they will fit Emeline for a C-Pap machine. Oh boy. I have no idea if/when/or how this will go, but if she needs to use it, we will work at making it happen! I'm hoping it will help some, that Emeline's Daddy uses a C-Pap machine, so it is something she is used to, (something that she likes to play with, actually!) so maybe that will make her a little more willing to give it a try?! I hope so! (But I'm not going to hold my breath. Because you and I both know, this girl has a penchant for NEVER doing things the easy way!)
Posted by Barb at 6:49 AM