Today, March 21st, is World Down Syndrome Day.  It is always a bittersweet day for me.  Sweet because I celebrate the absolute gift that Emeline is to my life, but bitter because I know that the  population of individuals with Down Syndrome is shrinking rapidly, thanks to early detection and the horror of abortion.  Bitter because I realize that over 90% of mothers who receive a diagnosis of Down Syndrome for the child they are carrying make the conscious choice that they would rather not have the child than have a child with Down Syndrome, it absolutely breaks my heart. It devastates me. "Why?"  you may be wondering.  "Why would you care?  It's someone else's child."  Not withstanding the fact that abortion breaks the heart of God, first and foremost, it breaks my heart because statistics like that demonstrate how little value my child's life is perceived to have by the world at large.  And having her in my life, I KNOW that that perception could not be more wrong. For the record, Emeline would still be a gift even if she did not have Down Syndrome.  The fact that she IS, is the gift----NOT that she has Down Syndrome. 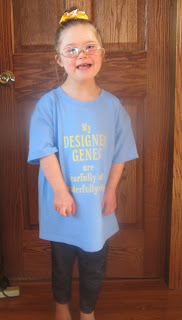 A t-shirt I had made for Emeline that says
"My Designer Genes are fearfully and wonderfully made!"

Emeline does not define Down Syndrome, nor does Down Syndrome define Emeline.  But the fact is, she does have Down Syndrome.  She was born with that extra (third) copy of genetic material on her 21st chromosome (which is why World Down Syndrome Day is celebrated on 3/21!), and that extra genetic material is what is responsible for all of the trademark descriptors by which many people who have DS can be identified:  very distinct facial features including a flat face, a small broad nose, abnormally shaped ears, a large tongue, and upward slanting eyes with small folds of skin in the corners.  In addition to the visible physical features, Emeline also has several medical challenges that people with Down syndrome have an increased risk of developing: GI problems, heart defects, vision problems, hearing loss, and speech-related delays. While Emeline does not have hypothyroidism, which is very common in individuals with DS, she does have other endocrinological problems (hypoparathyroidism, adrenal insufficiency, and salt wasting).  Other health challenges more common to people who have Down Syndrome are leukemia and chronic respiratory infections.
People with Down Syndrome almost always exhibit some level of mental retardation; children with Down syndrome usually develop more slowly than their peers, and have trouble learning to walk, talk, and take care of themselves.  That is not to say that they can not do it; but it does take them longer. Emeline has been no exception to this rule.

All of these health-and-development-related challenges can be exhausting in and of themselves. Add in the socially challenging issues that come with having Down Syndrome, and life can indeed be daunting at times.  Having a visible disability is both a blessing, and a curse.  It is a blessing when individuals notice that a person has Down Syndrome and extend grace in the form of extra patience, but it is a curse when the opposite occurs.  Not everyone is willing to wait that extra few seconds for a person with Down Syndrome to respond to a question; patience is a virtue that not everyone has.  The derogatory word "retard" and phrase "That's so retarded" have been such a bane to individuals with cognitive impairments (and those who love them!) that there has been a concentrated effort called "Spread the Word to End the Word" that hopes to eradicate the use of such hurtful language.  Discrimination against those with disabilties still goes on.  Even in Emeline's young life, she has been discriminated against because of her disability, because she has Down Syndrome.  Last year I called to inquire about a dance/tumbling class for Emeline, and the owner/instructor was more than happy to add another student to her troupe until I mentioned that Emeline had Down Syndrome.  I had asked early in the conversation if the instructor was comfortable working with kids with disabilities.  She gushed about how they'd had many kids with disabilities through the years, and how it definitely was NOT a problem.  I breathed an conscious sigh of relief and went on with my other questions.  At the end of the conversation I mentioned how glad I was to have found this class, because with Emeline having Down Syndrome, physical therapy had been a part of our life since she was born, and since she had been released from physical therapy, I was looking for some movement-related activity to keep her active, and this seemed like the perfect opportunity. The immediate silence that followed was stifling.  I waited, and waited, until finally I said, my voice wavering as tears threatened to spill, "Wait a minute.  Is Down Syndrome a problem?"  To which she immediately replied, "You find 5 or 6 other kids with Down Syndrome, and we'll have a class just for them."  I was stunned.  I said, "But you said earlier that you were comfortable working with kids with disabilities." To which she replied, "Yes, but it's not fair to the other kids to have someone with Down Syndrome in their class."  This person had never met Emeline, yet based solely on the fact that Emeline has a diagnosis of Down Syndrome, she had already determined that she was not going to succeed in a class with her typical peers.  This, exactly this, is why we have an on-going need for Down Syndrome advocacy and awareness.  With early intervention, therapies, and new research, kids with Down Syndrome are accomplishing more than their peers of the last generation.  Their future is bright, and their hopes and dreams are within reach.  As a parent of a child with Down Syndrome, my job is to educate and prepare her for the world and the future.  But it is also to prepare and educate the world for my child.  And so today, I write.

What are YOU doing to make the world a better place?  I am working on rearing one little girl who was blessed with one extra piece of genetic material who has an amazing capacity to spread joy, to encourage, to renew hope, to cause laughter, to amaze, to inspire, to motivate, to uplift, to bless,  to LOVE.  Happy World Down Syndrome Day.
Posted by Barb at 6:54 AM