December 16th was Emeline's Christmas Program at School. Grandma and Papa and Aunt Joy came over from Illinois for the day, just so they could see Emeline sing with her class. How neat was that?!? Emmie knew they were coming, and she was SO excited. I was a little nervous, because on the 15th, it started snowing. And kept snowing. And I know neither of my parents are great fans of "Let's take off on a road trip in the middle of winter with the snow comin' down" trips. So I was mentally preparing myself that they were probably going to call and say they had decided not to come. But the call never came. And when I called to ask where they were, they were almost to my house!

So they came, and we went and saw Emeline perform. Her class sang two different songs. This was Emeline's third year being in the school's Christmas program. The first year, her teacher had to physically hold her up on the stage, because she kept trying to come down. Last year, she stayed up there, but didn't sing. So I had already given myself the pep talk that even if she didn't "do" anything, it was okay. But she surprised me! She stood silently there through the whole Chipmunk's Christmas song, "Santa Don't Be Late," while her class sang, but when it came to the part, "[someone, I don't remember who] wants a Hula-hoop", she opened her mouth and sang the words "Hula Hoop!" She opened her mouth and said the words! I was so surprised; I think my jaw dropped open! Other parents may have seen a child who only sang two words, but *I* saw a child who SANG TWO WORDS!!! She knew the words, she knew when they came in the song, and she came in at exactly the right time! I was SO proud! and Excited! That, my friends, is progress! Yay!!!

After the program (which was only about 10 minutes), all of the guests were invited to stay and eat lunch in the classroom, so we did. Emeline was able to show Grandma and Papa and Aunt Joy her cubby, and her chair, and her favorite places in her classroom. :) After we left there, we all agreed we were still hungry (since the lunch consisted of a ham sandwich and half a banana LOL), so we went to the diner on The Square and ordered some lunch. LOL 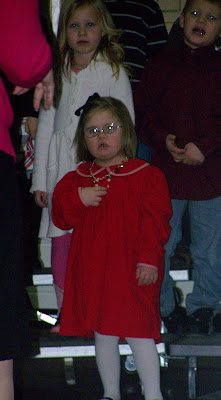 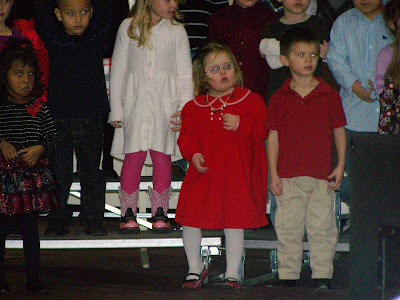 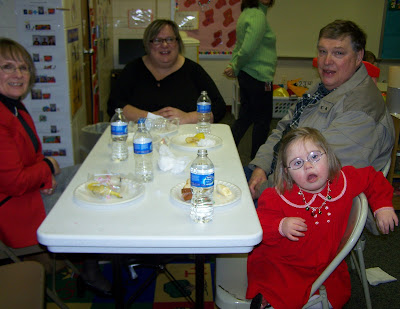