My camera battery died after this one picture, so it's the only one I've got. :( This was the first year Emeline has been trick-or-treating. We've never taken her, since we don't really know many people where we live now, and we're out in the country.
Emmie's costume was a puppy, which she thought was WONDERFUL. LOL We only went to a few houses (the people who had been to her party earlier that day, in fact). Instead of begging for treats, we did reverse trick-or-treating---We TOOK treats with us! We had great funny "treating" each of Emmie's special friends to farm-fresh eggs that we had brought with us from home, and left-over birthday cake from the party earlier that afternoon! They were all thrilled with their Halloween "Treats!" I told them, "We're taking Em out egging for Halloween!" LOL 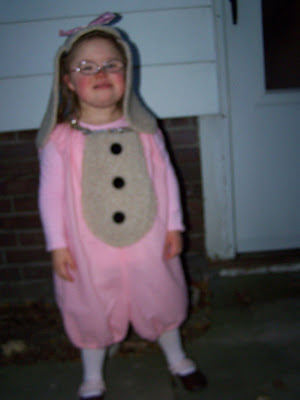