On the Monday after Thanksgiving, Em and I hit the road again. (Yes, we do that a lot.) My Aunt Caryl had passed away, so we were going back to Illinois for her funeral. Things got a little complicated, however, due to the fact that Em had a follow-up sleep study already scheduled for that Monday night---in Iowa City. But I was supposed to sing and play the piano for my Aunt's funeral, and I really did NOT want to do that without practicing with the person I was playing for (my sister, Joy), so I really needed to go to Illinois, too. So...we left home after Emmie got out of school, and went to Illinois, where we stayed for about 2 hours---long enough for Joy and I to practice until we were both comfortable with the songs, and then Emmie and I headed to back to Iowa again, to the hospital in Iowa City.

The idea of a C-Pap Machine isn't new to Emeline; Bill uses one every night. She has messed with his more than once, putting the mask on herself, or on her baby doll. So I had hoped that it might not be a HUGE ordeal, getting her to wear the mask. Well, she screamed a good while and kept trying to take it off, but she eventually wore down and gave up. It was definitely another one of those times where I wished she was able to tell me what she was thinking/feeling. (Other than, "No, Mom, No! Hep, Mom! Noooooo!" That is just heart-breaking. We have been through it too many times to count, and it never gets easier, even when you know it's something your child NEEDS, and something that will HELP them.) Anyway...I *think* that she was scared because she couldn't feel her nose, when she had the mask on, so maybe she was thinking that her nose was gone, or something? I don't know, obviously. But each time she woke up, she said, "My nose, Mom," and then would reach over to me, and feel MY nose. I just kept telling her that her nose was still there, it was just under the mask, and she immediately calmed down and went back to sleep, so I don't know if that was it, or not. All I know is that it calmed her down. Although she did wake up several times through the night, overall, I considered the experience a success. We left at 5:30 Tuesday morning, and headed back to Illinois.

The funeral was as nice as a funeral can be, given the circumstances. My Dad conducted the service; I imagine that was one of the harder funerals he has presided over, given that it was his sister. Funerals are not one of my favorite things to attend, but my Dad does a wonderful job of using those times to remind us of the things that REALLY matter.
My Aunt Caryl was ready to go; there is peace and comfort in knowing that.

After the service, I enjoyed having the chance to visit with many other aunts, uncles, and cousins at the funeral dinner. I especially enjoyed watching Emeline interact with some of my relatives. It is always interesting to me, to watch other people watch her. I love to watch their expression transition from curiosity and uncertainty to joy, and for anyone who gives her half a chance, that is what this girl does to people. What a gift she is!

Here are the pics from her second sleep study, where she had to wear the mask. 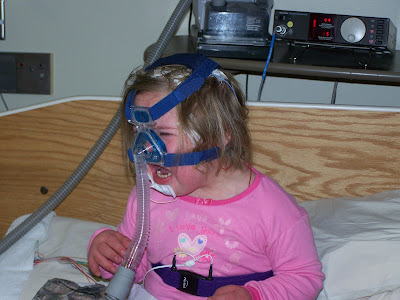 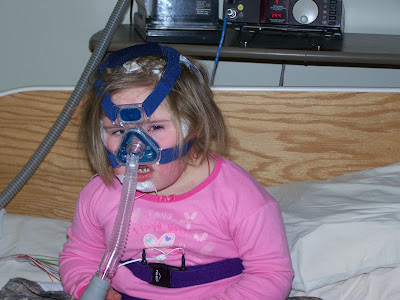 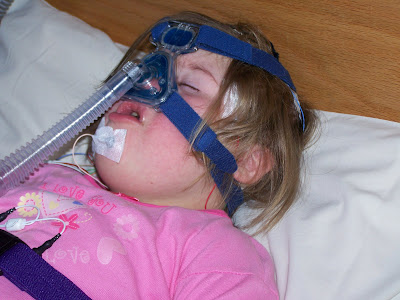 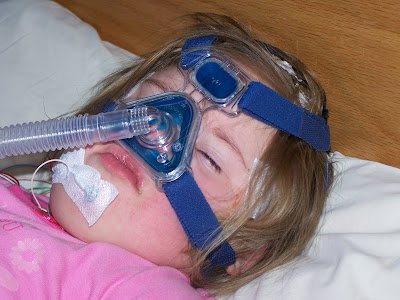