I'm not even kidding you...

THIS is what she just brought me. Just NOW. Like, 5 minutes after I posted the picture-filled post of Emeline making pizza--the post immediately below this one. 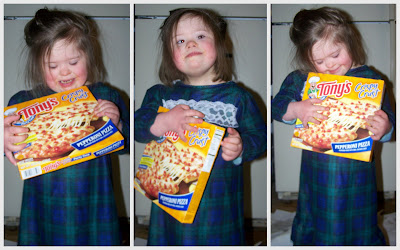 She ate one piece of her HOMEMADE pizza, and then she disappeared,
only to return a few minutes later carrying this Tony's frozen pizza. (She has disappeared to the basement, where the big freezer is.) At first I just thought she was showing me the pizza, you know, like, "Hey, Mom!
Look, we MADE a pizza, and here's a pizza from the freezer. Isn't that cool?!? Two pizzas! Awesome!!"

But no. That wasn't what she was telling me. In no uncertain terms she made very clear to me that she wanted me to cook the frozen pizza. (We won't even pretend that THAT actually worked out the way she had wanted it to. Yeah, NOT a CHANCE.) She wanted to eat the frozen pizza. She did NOT want to eat the homemade pizza. She had great fun MAKING the homemade pizza, but when it came down to it, she didn't want to EAT it. She wanted the Tony's pizza, NOT the homemade pizza. I can't believe it. I really can't. What a sad, sad day for pizzas everywhere....Except for Tony's pizzas, of course.

Silly, silly, pizza-confused girl of mine.
Posted by Barb at 5:32 PM