In the last week, Emeline has been playing a new game that she just LOVES. I really need to capture her saying it on video; her pronunciation is pretty cute. The new game is "Peek a Cod." (Otherwise known as "Pick a Card." LOL)

She got a SpongeBob game set for her birthday that has 4 different games in it, but after looking at it, I felt like all of the games were still a little too challenging for her, so I put it up and away in the closet, thinking I'd pull it out in a few months and see if she was a little more ready for the games at that point.

But if you know Em and her unparalleled love for all things SpongeBob, you know that there is no way she was going to *HAVE* a SpongeBob game---or ANYTHING SpongeBob, for that matter--and not have it out, using it and loving it. The game was no exception, apparently. After I put the game up, she promptly got the broom from the kitchen and used it to knock the box back down from the closet shelf. (Ha! So THERE, Mom!) Once it was down, she opened it and took out all the pieces inside the game. (I really believe it must be men who have never been around small children who think that it is a great idea to come up with a game that requires 47 plastic chips, 63 cards, a spinner (that absolutely MUST be made out of the flimsiest paper and plastic avaiable!), and seven game pieces, along with the game board. I mean, REALLY?!? REALLY??? But I digress again...) So she got the game down, and the pieces were joyously spread throughout her room.
I did discover that Em didn't really care about the game itself, she only wanted the SpongeBob cards that came with the game. I did concede and let her have them, rationalizing to myself that we could practice numbers (since they do have the numbers on them), we could practice speech articulation by naming the characters (since they feature different characters from the SpongeBob series), we could practice colors (since the cards are different colors)....yeah, we could use them. So out they stayed. And throughout the day at different times, sometimes Em would bring the cards to me, other times I would get the cards, but we would do SOMETHING with them, whether it was counting, naming the characters, identifying the colors...you get the idea.

But the other night, Em came up to Daddy, cards fanned out in her hand, and said, "Peek a cod."
"What??? Say that again?"
"Peek a cod."
So he did.
After he picked his card, she yelled, "Bob-Bob!" and he said, "That's right. It's SpongeBob."
He laid the card down on the table, and Em held out the cards again. "Peek a cod."
So he did. And so the card game went. Daddy picked a card, and Em guessed which character was on the card.
She did get a little upset when, the next round, when it was Mommy's turn to play, Mommy made her turn the cards
around so Em couldn't SEE who the characters were, when Mommy picked a card. LOL
But she finally came around to the idea, and eventually thought it was great fun, even NOT knowing for sure
who the characters were on the cards Mommy was picking.

Peek a cod. Pick a card. Those words are music to this Momma's ears. 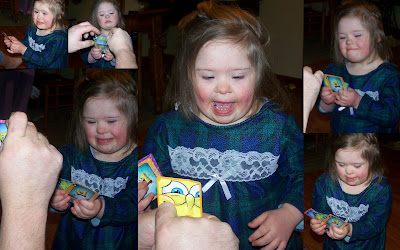