We did quietly celebrate Emmie's big day here at home in Iowa, though--just the 3 of us. We had spaghetti for supper, which is usually one of her favorite meals, but for some reason, she just wasn't loving it tonight. Huh. That's weird for her. Really weird. And, while she *WAS* excited about blowing out the candles on her (admittedly very plain and boring) cake, she wasn't interested in *EATING* any of the cake, and she said "no" to the ice cream, too. Huh, again. That is just NOT normal for her. Really!

So, Em's quiet birthday celebration was mainly having her favorite meal for supper, and a simple chocolate cake with ice cream. Simple is nice, isn't it? :) (Except that it does NOT make for a very exciting blog post!)LOL

Before I close, I will share yet another one of Em's latest stunts--this one is from today, actually.

I got up early and baked Em's birthday cake, so it was done (as in, baked) this morning. It hadn't cooled before we left for church, so I left frosting it to be done later. After church and lunch, we went home. I realized after we got home, that I needed to go to the store, so I told Bill I was heading out, and I asked him to keep an eye on Emmie while I was gone. I called him from the store, to ask him a question, and he said, "Did you have something chocolate in the kitchen?"
Me: "Yeah, why?"
Him: "Well, Em just came in here [in the living room], and she has chocolate all over her face and in her hair."
Me: "Well, does it look like chocolate cake?"
Him: "Well, maybe. Yeah, I guess it could be."
Me: "Well, it sounds like she has discovered her birthday cake, and decided to help herself."
Him: "Oh." (long silence) "Whoops."
Me: "Yeah. Whoops."

So, (insert LOL here), after just typing the story above, I feel better knowing that I have probably solved the mystery as to why Em wasn't that interested in eating supper OR cake. She had already had hers! ROFL 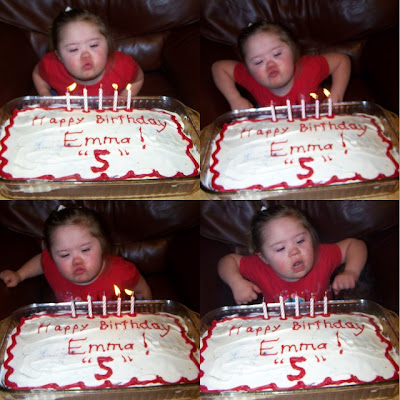