Monday is Em's "busy day" of the week.  She goes to school in the morning, and I pick her up at noon. We go home, eat lunch, take meds, and then head off on one of our two trips of the week going into "the big town." (As compared to "the small town" where Em goes to school. LOL)

On Monday afternoons we do most of the week's shopping, and go to the Y; on Wednesdays we may or may not shop again (depending on how urgently we need anything! LOL) and Em has Speech Therapy and bloodwork (well, bloodwork is only every other week).  So Monday and Wednesday are the only two days of the week where we have access to several department stores, fast food, Walgreens, several grocery stores, and the occasional Redbox movie.

We usually head into town around 1:00.  I get most of my grocery shopping done, and then we head to the YMCA for Tumbling.  I have really noticed growth in Emeline's coordination and balance since she started Tumbling, so I definitely think it has been a beneficial activity for Em, not to mention that she LOVES it!

Emeline started doing Tumbling last spring, when Em's Physical Therapist suggested that Em no longer required PT, but that she would benefit from some on-going regimen that included regular exercise. Em is walking very well now, and running, too, and is beginning to jump. (She's still working on getting both feet off the ground at the same time.) The only two goals that our PT said she could continue working with Em on, were jumping and riding a tricycle, but she said neither of those were really "necessary" life skills, so on her suggestion, we quit PT and signed Em up at the Y.  That's how we got into Tumbling (because I'm sure the "not knowing" was killing you! LOL).

Tumbling is from 3:30 to 4:00. I am more than a little proud of what Em has learned in Tumbling. Not because anything she learns there is a critical life skill, but because it is challenging her and pushing her to try new things. And she is DOING them. When she started, she coudn't do a somersault.  Now she can.  She also enjoys walking on the balance beam, and doing the spider-walk, where she puts her hands on the floor, with her back facing the wall, and then "walks" up the wall.  (I'm guessing this is the precursor to doing a back-bend or walkover, or something like that, but don't quote me on that; I never did Tumbling, myself! LOL) Regardless, she really enjoys it.

She has had the same Instructor the past 2 sessions, and I am so happy with Miss Tamara.  I was a little apprehensive (okay, it was more than a little) when I first signed Emmie up, because I just didn't know how Em would do--if she would like it, if she would be willing to take turns, if she would be able to do whatever it is they were going to do.  But Miss Tamara just went with it.  She didn't even blink when we walked in; she just treated Em like the other 2 girls in the class, which was exactly what I was hoping for! Yay!  She has made Tumbling a fun and challenging learning experience for Emeline, and I know that Em truly does enjoy it for two reasons:  1) She is frequently doing her tumbling "tricks" at home, and 2) She loves to carry around a picture of  her that I took at Tumbling; she pulls out the picture, and always says just one word:  "Fun!" :)
So yes, I am fairly certain that Tumbling will continue to be in Em's future, or at least the near future. 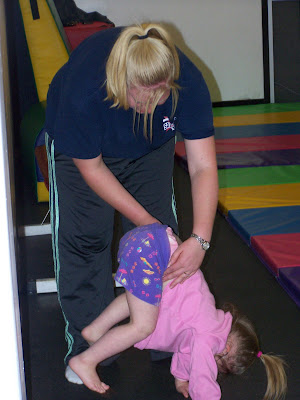 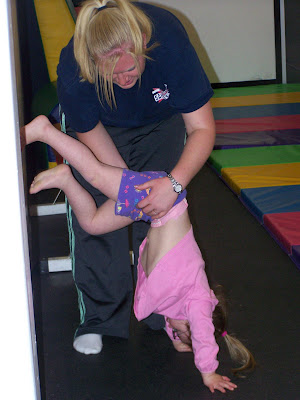 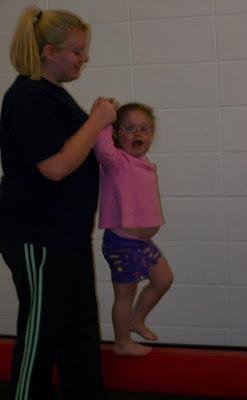 For the record, Emmie usually wears more suitable clothes for Tumbling, but yesterday she had a little accident and had to change after we got there, hence, the not-so-appropriate-for-Tumbling attire. When will I learn to always bring along a spare set of clothes?! I had to dig those out of a bag of clothes that we were taking to Goodwill! Oops!

After Tumbling, we have an hour-long break.  During the break, we usually head over to Walgreens and pick up prescriptions or just browse the aisles, before heading back to the Y again for swim lessons. Yesterday we found two puzzles in the clearance aisle; Emmie was thrilled because they were SpongeBob.

After paying for our puzzles, we headed back over to YMCA for swim lessons. Em loves swim lessons.  She loves being in the water.  Absolutely LOVES it.  While she is still not swimming independently, she has made progress. She will jump in, and she has no problem with going under water or getting her face wet.  She's got the kicking piece down well, but the necessary arm motions are still a little iffy.  She really enjoys holding the float-board-thingie-with-handles (I'm sure there's a name for those things, but at the moment, nothing is coming to me!?) and kicking and swimming the length of the pool that way.  She is beginning to doggie paddle a little, but has never done so without the floatation belt on, so I'm not too certain as to whether or not she could hold herself up, or not.  But regardless, she loves, loves, LOVES swimming lessons.  Even more than Tumbling.  She talks about the pool EVERY.SINGLE.DAY.  Well, she doesn't really talk about it, but I know she is thinking about it, because she will come up at random times throughout the day and spontaneously say, "Mom, Pool!" and I tell her (repeatedly!) No, today is not swimming lessons.  About half the time she cries; the other half, she gets mad.  But yeah, she loves swimming, and nothing would make her happier than be able to swim every day, I'm sure.  For now, though, she'll have to settle for swim lessons once a week.