Independence Day, Or, The Day She Told Mom "I Will Do It Myself!"

Since May of 2008, when Emeline had a seizure that resulted in her being diagnosed with hypoparathyroidism, routine bloodwork (aka labs) have been a part of Emeline's new "normal." Initially, she was going for labs twice a week, then once a week, then once every two weeks, and there we have remained, for the past two and a half years, pretty much.
When she was diagnosed with Addison's Disease last year, we went through a time of more frequent labs again, but that tapered off, and we are back to our every-other-week regularly scheduled programming.

Last week, Emeline took one step toward declaring her independence (at just 4 days shy of being 5 years old). For the past 2.5 years, I have gone into the room with her, climbed up into the chair, taken her on my lap, held her arm down, and (for a VERY long time) used my legs to keep her legs locked in, so she couldn't hurt the phlebotomists, when Emmie did her usual routine of kicking, screaming, wiggling, and fighting for all she was worth, trying to avoid the inevitable dreaded "poke." EVERY.SINGLE.TIME. she did this. Without fail. No matter who the phlebotomist was. No matter how kindly they spoke to her. No matter how many times I spoke with her on the drive to the hospital, telling her that it would only hurt for a minute, and then it would be over, reminding her that she would get 2 stickers when they were done. And yes, occasionally struggling to hold back my own tears as I sat there in the chair, holding my sweet girl down, hating more than she did, that she was having to endure it. But endure it she (we?) did, because there was no choice.

I have no idea what changed last week. But something clicked in Em's mind, and for the first time EVER, she took charge when we crossed the threshhold of the lab. Michelle, the phlebotomist came out, and greeted us both by name. (This momma has paid attention to the work schedules of certain people who do well with Emmie, and you'd better believe that I make a POINT of going when I know one of our "preferred providers" will be working! LOL) She told us to come on back, and so we both rose from our seats and followed her through the door. When we entered the little room, Emmie immediately turned to me and said, "No, Mom. Don't get up in the chair to hold me on your lap. I can do it myself. I don't need you to hold me down today while I fight you with everything that is in me. I can handle this on my own today, thankyouverymuch."

Now, if you know Emeline, you know that she really didn't say that. What she ACTUALLY said was, "No, Mom. ME. No Mom. BACK." (Luckily for you, I happen to be quite fluent in Emma-ese, and I am able to translate for you.) ;)

Michelle's jaw dropped open, and I'm certain mine must have hit the floor. I looked at Michelle a bit hesitantly, and she said, "I think she wants to do it herself today." I said, "That is EXACTLY what she wants." I looked and Em and said, "If you want to do it yourself, go ahead. Get on up there."

And that's just what she did. Without the slightest hesitation, she climbed up in the chair, pulled her sleeve up, and put the arm rest pad down. With not so much as a whimper or even one attempt at withdrawing her hand, she held it there through the poke, and long enough to fill the needed 2 vials. In her own words, she had told me, "I can do it myself." And that's exactly what she did. 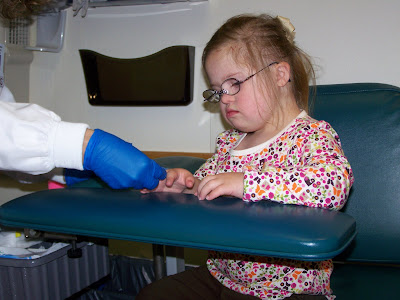 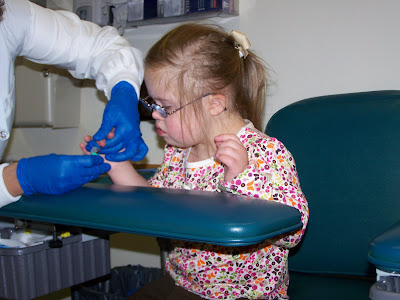 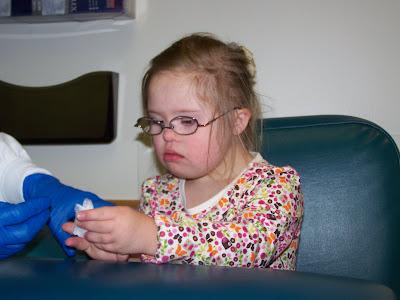