We stayed home today and did our usual Tuesday "stay-at-home stuff." I snapped a couple of pictures of Em this morning, simple glimpses into our normal day-to-day life.

One of Emeline's favorite things to do is go outside and draw with chalk on the concrete in front of the front door. Visitors--if we ever had any--would be greeted by her bright chalk drawings, right now most of what appear to be suns. (Or, as she calls them, "wound an wound" (translation: round and round, aka how to draw a circle!) :) 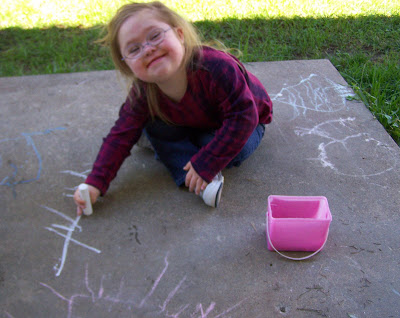 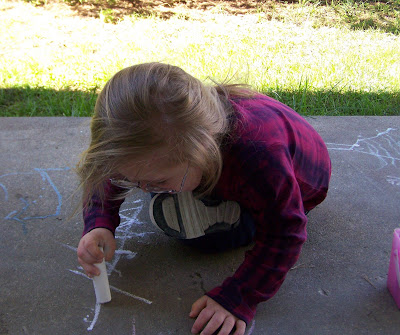 Something else Emeline really enjoys is feeding the dogs. Almost without fail, as soon as she wakes up in the morning, she wants to give milk to the cat, and feed the dogs. (And some days, she must feel especially generous, because she is even willing and wanting to give the cat some of her most-treasured "chocca-mook" (translation: chocolate milk). While I appreciate her willingness to take care of the pets, I usually encourage her to wait until a little later in the day--at least until the sun has come up. (And no, we don't ever give the cat chocolate milk, much to Em's disappointment. LOL)

When she starts in on saying "Wuff-wuff" (translation: Dog) and "Food!" first thing in the morning, I usually tell her the dogs and cats are still sleeping, which generally appeases her....until the dogs start barking, and then it's a lost cause. Let's just say the girl is VERY persistent when she feels something needs to be done! LOL And rest assured, our dogs will NEVER go hungry, as long as Emmie is around! 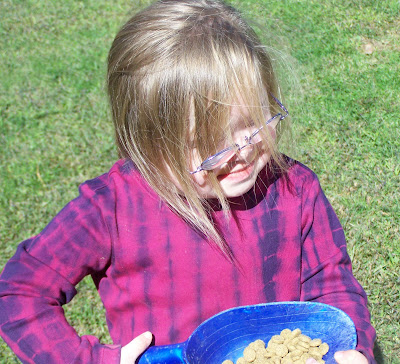 We really did do more today than *just* color with chalk and feed the dogs, but the camera batteries died after we fed the dogs, so that's the end of the pictures from today, and since I am tired, I think we'll call it good and leave it at that for today! :)